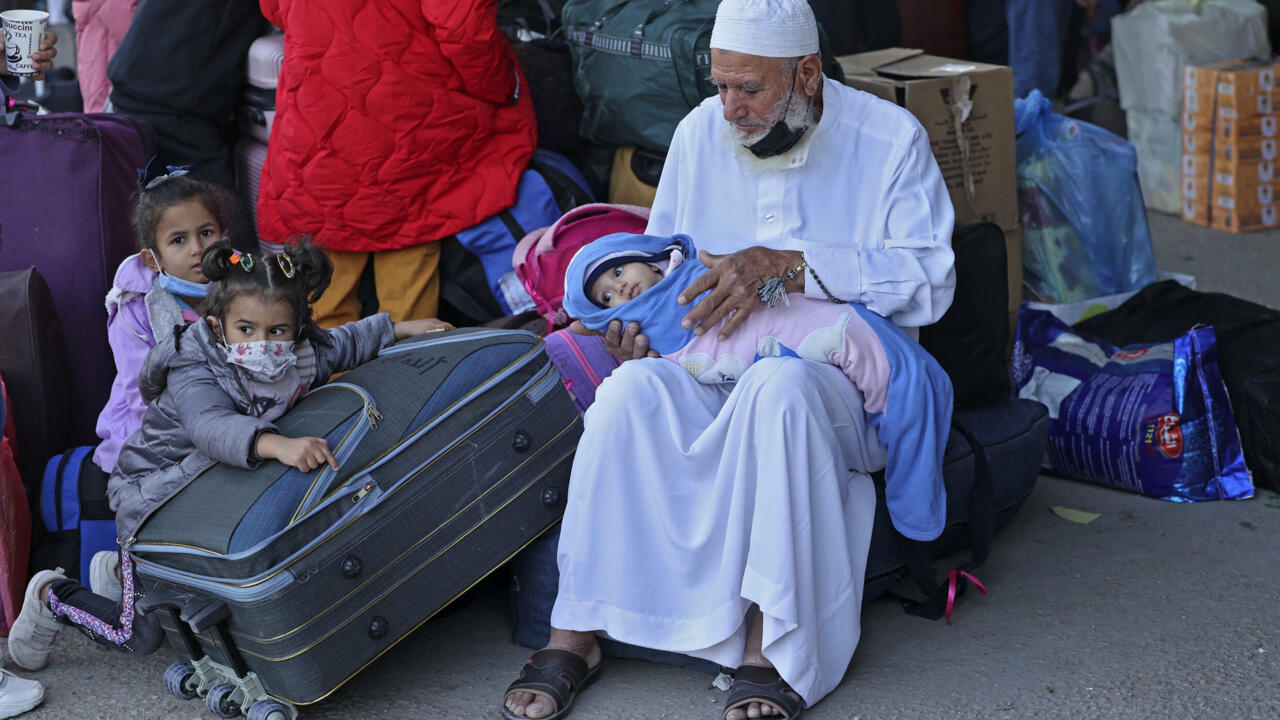 Rafah (Palestinian Territories) (AFP) – Gaza resident Mustafa al-Sawaf posted a scathing criticism online of the â€œpath of humiliationâ€ Palestinians experience when they leave the overcrowded enclave for Egypt, and the businesses that profit from it.

In less than an hour, his phone rang.

“Someone from Hamas called me and told me to erase everything,” Sawaf said, referring to the Islamist group that manages the coastal strip blocked by Israel.

The interlocutor said border affairs were “a very sensitive subject for the Egyptians, and my article would harm the Palestinians,” said Sawaf, a political analyst.

He quickly deleted the social media post – but it had already elicited dozens of supporting comments, reflecting widespread frustration over Gaza’s main lifeline with the outside world.

The 380-kilometer (240-mile) road trip to Cairo crosses the sweltering deserts of the Sinai Peninsula, where the Egyptian military battles the Islamic State group and operates checkpoints and nighttime curfews. It also crosses the Suez Canal.

The common complaint in Gaza is that the trip, often done in stuffy buses, is deliberately made more arduous and uncertain so that travel operators can enjoy it by offering hassle-free “VIP services” to those who can afford them.

“It’s a disaster for the Palestinians,” said an industry source, speaking on condition of anonymity, who estimated the business is worth up to $ 175,000 a day.

“On the Egyptian side, they are applying more and more pressure to make it difficult to return to Gaza, trying to get people to pay for VIP service next time.”

Gaza, an impoverished territory of some two million people, where Hamas fought its last war against Israel in May, is a difficult place to enter or exit.

Israel, which once occupied Gaza, has maintained a strict land and sea blockade on the enclave since Hamas took control in 2007.

The Jewish state maintains that this is necessary to protect itself from a group labeled as a terrorist organization by much of the West.

Yasser Arafat International Airport was bombed by Israel at the start of the Second Palestinian Intifada, the uprising of 2000-2005, and goats now graze on its defunct trail.

Israel also does not allow passenger ferries to dock at Mediterranean ports in Gaza.

This leaves only two routes out of the territory: tightly controlled land crossings through Israel and Egypt.

The Erez crossing to Israel is restricted to Palestinians with a permit to work or trade inside Israel, certain serious medical cases, and certain people with a transit permit to Jordan.

This means that for most Gazans, the Rafah crossing point to Egypt offers the best route.

But it is known to be, all too often, an expensive and bureaucratic nightmare.

Palestinians are forced to put their names on a waiting list weeks before planning their trip, and transit is still not guaranteed.

To ensure their travel, Palestinians have resorted in recent years to paying hundreds or even thousands of dollars to private companies and intermediaries offering â€œVIPâ€ services.

This created frustration with the Egyptians seen as profiting from the trade.

There was a brief period in the Hamas era when transit through Rafah was easier.

In 2013, when Egypt was ruled by the late President Mohammed Morsi, a member of the Muslim Brotherhood less hostile to Hamas, a record half a million Palestinians passed through Rafah.

But the numbers dropped dramatically after Morsi’s ouster in July of the same year.

Under current President Abdel Fattah Al-Sisi, Egypt periodically opens and closes Rafah, a tactic that allows it to exert influence over Hamas.

Several Gazans who recently made the trip via Rafah have spoken to AFP, on condition that they are not named for fear of being blacklisted by Egypt for future trips.

A man who asked to be called Ahmed said he returned from Cairo earlier this year on a road trip that is expected to take around five hours, spanning four days.

First, he hired a private taxi that left Cairo at 4 a.m. on a Wednesday with a deal to take him to Rafah for $ 130.

The trip was halted at the entrance to the Suez Canal area, where the passage of vehicles was closed and crowded with taxis.

He got out of his taxi, shared the cost of another with five other passengers, and slept in the car.

At the checkpoint, he said, “the Egyptians opened all my bags. They confiscated my cologne, cigarettes, opened my Facebook and WhatsApp profiles and looked at my photos.”

After three security checks, he passed through Sinai without problems until he reached another checkpoint 50 kilometers from Rafah late Thursday afternoon, where the Egyptians announced the road was closed.

He said he rented a “totally dirty” room in the nearby town of al-Arish and stayed there for two days until the road reopened.

Ahmed and his companions rushed towards Rafah but missed the hour-long window to cross that day.

Devastated, he slept on the street and crossed the next day.

For countless Palestinians, the Rafah-Cairo round trip is complicated by the security conditions in Sinai, an area where IS jihadists clashed with Egyptian forces.

Fatima, also not her real name, said she suffered a cold sweat while sleeping at a checkpoint last year as she traveled with a group of women from Cairo to Gaza.

“I lay down on a cardboard box and made a blanket with my abaya dress,” she told AFP.

“I was scared, we were in the desert, there was no water, no toilet.

The next night, at the Baluza checkpoint about 200 kilometers from Rafah, she slept on a bus and then under a bus in al-Arish the following night.

She said it was hot and the children also trying to sleep under the vehicle cried through the night.

When she had to relieve herself, she asked other women to stick around for privacy.

‘Kills me from the inside out’

Ahmed said the cumulative hardship of the travel was devastating and humiliating for Palestinians.

â€œIt is killing me inside,â€ he said. â€œThe people of Gaza are treated very badly. It is as if we are all terrorists, members of Hamas, but Hamas is not Gaza.

His frustration grew when, after returning to Gaza, he met other people who had made the same trip in one day.

The difference, Ahmed said, is that they paid the VIP fees.

“In the end, counting the taxis, the rotten hotel, I almost paid the same amount and it took me nearly five days,” he lamented, accusing Egyptian security officials of creating conditions aimed at compelling Palestinians to use VIP service.

Gaza-based companies charge $ 1,000 to expedite travel to Cairo, including check-in, private taxis and other documents.

The return costs $ 600, making the entire trip more expensive than most Gazans can afford.

Multiple sources – in the border industry and among officials – have confirmed that these Gaza-based companies are coordinating with an Egyptian company named Abnaa Sinai.

A woman who asked to be identified as Hiba said that when she decided to travel to Gaza earlier this year to see her family after several years abroad, she was chilled by her experience at the checkpoints Egyptians.

The guards “are looking at us with eyes that say ‘I hate you,'” Hiba told AFP, explaining that she had since decided to pay the VIP fees to speed up the process.

In recent months, Palestinian officials have urged Egypt to facilitate the transit, including Gaza Chamber of Commerce chairman Walid Al-Hosari.

Hosari told AFP that Egypt has announced it will increase the number of travelers allowed through a new tunnel under the Suez Canal, which will make travel easier.

Palestinian economist Omar Shaban, an expert on Gaza-Egypt trade, said forcing Gazans to pay huge sums for transit is a bad strategy for Egypt if it hopes to continue participating in the reconstruction of Gaza ravaged by war.

Border trade is a “great generator of money,” Shaban said, but stressed that Egypt cannot seek to be a player in the reconstruction effort while obstructing the movement of Palestinians, stressing that their policies must be “harmonized”.

A senior Hamas official, who requested anonymity given the “very sensitive” nature of the subject, said that on the issue of facilitating travel, the Egyptians “promise and promise, but you never know if this will happen. will materialize “.