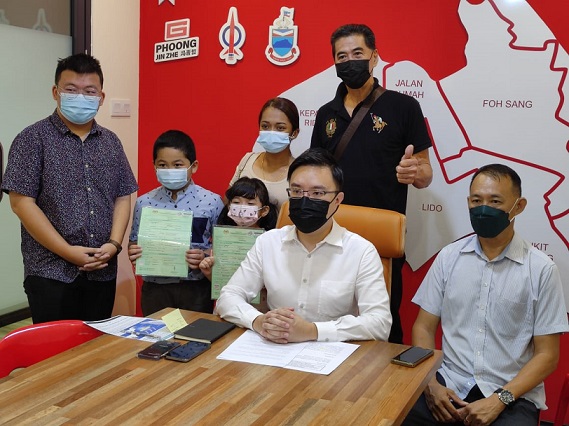 KOTA KINABALU (December 27): To parents Ting Leng Ming and Arsaida Abdul, their greatest Christmas present this year is none other than the approval of citizenship for their two children which will allow them to access education without hinders.

The two children encountered difficulties in enrolling in primary school due to their stateless status and the lack of papers.

It has been learned that Ting and his wife Arsaida are both Malaysians. However, due to some issues with Arsaida’s identity and the couple’s marriage certificate, their two children were unable to obtain citizenship.

The couple eventually sought help from Luyang congregation member Phoong Jin Zhe, who helped parents apply for citizenship for the two children from the National Registration Department (NRD) as they have sufficient documentation. .

On December 21, parents received the good news that citizenship applications for their two children, Mohd Sya, eight, and Shirlley, six, had been approved.

Mohd Sya has already enrolled in SK (C) Anglo Chinese and his sister, Shirlley, will follow in his brother’s footsteps to enter primary school as well.

Nonetheless, Phoong said that as long as both parents or mother are Malaysian, children should be entitled to citizenship even if their parents’ marriage certificate is not recognized.

Therefore, he urged the NRD to improve the application procedures to address similar issues faced by Malaysians.

Meanwhile, Phoong urged the state government to prioritize in planning the modernization of the transportation system in the state capital, rather than doing the opposite by implementing the sky train project. .

â€œWe need to resolve the bus terminal issues first, given the increasing traffic congestion in Kota Kinabalu. Every month there is a 3% increase in the number of vehicles on the road.

He took to task Sabah’s Deputy Chief Minister and Minister of Public Works Datuk Seri Bung Moktar Radin for proposing the aerial train project, which could end up becoming a white elephant.

He said the contractors would ultimately be the sole beneficiary of the project.

Phoong, who is also secretary of the Sabah Democratic Action Party (DAP), cited a written response from the chief minister at the recent session of the state legislature, which said the maximum capacity for Bus passengers at KK Sentral was 3,200 per day, but the average capacity was only around 500 passengers per day.

According to the Greater Kota Kinabalu Public Transport Master Plan launched 10 years ago, he said the Wawasan Bus Terminal and Bus Stop was supposed to be built and upgraded between 2011 and 2012, followed by the South Terminal in Kepayan, from Inanam North Terminal, rapid transit and traffic information management system between 2013 and 2016, and light rail or monorail between 2017 and 2020.

To date, he said the government has only completed KK Sentral while other plans have yet to begin.

Phoong urged the state government to set up a special bipartisan committee to explore other suitable transportation systems.