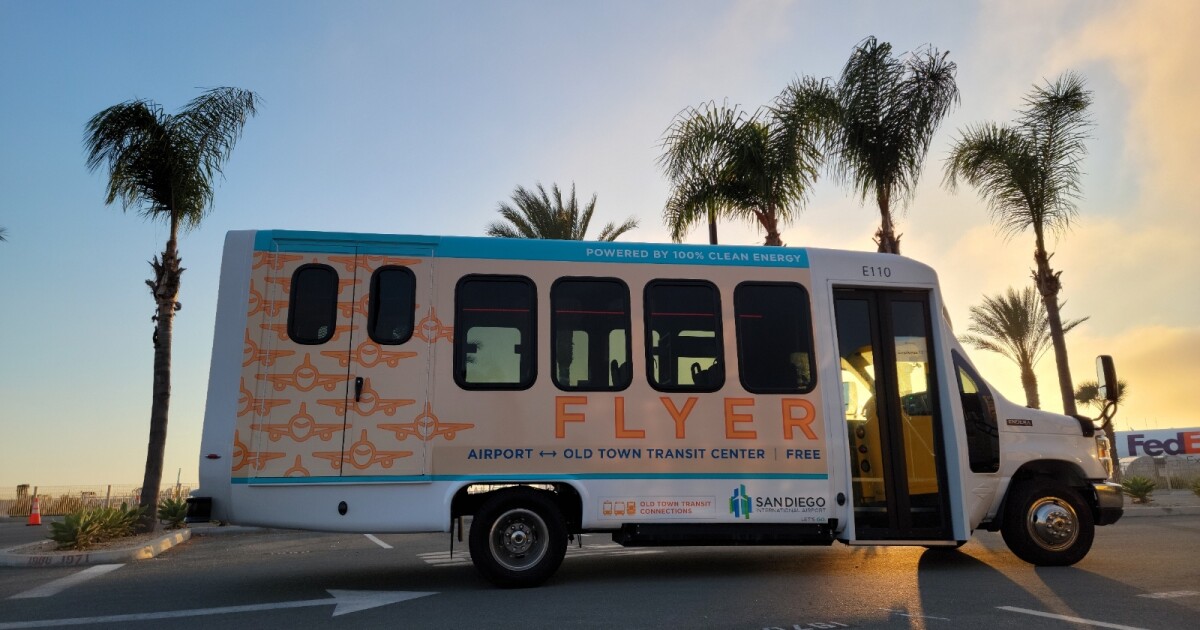 Free shuttles began carrying passengers between San Diego International Airport and the Old Town transit hub this week in an effort to reduce the long-standing need for public transportation to and from the airport.

Six shuttles will run seven days a week from approximately 4.45 a.m. to 12.30 a.m. each day, stopping at Terminal 1, Terminal 2 and the transit center. These buses come and go every 20 to 30 minutes on a synchronized schedule with the trolley, Metro transit system buses, and Coaster and Amtrak trains that regularly drop passengers off at the Old Town transit hub. Electric shuttles shouldn’t be hard to spot, as they carry airplane images along their sides, an airport logo, and the word “Flyer” in orange.

“The San Diego Flyer will provide a seamless connection between the airport and the Old City transit hub,” said Kimberly Becker, CEO of the San Diego County Regional Airport Authority. “This is one of the many ways that the airport authority is working to improve passenger access to SAN (the airport) and we hope that passengers arriving or departing from the airport will benefit from this service.” free. “

But things got off to a slow start on Sunday. Only 29 passengers took the shuttles, according to Airport Authority spokesperson Sabrina LoPiccolo. She added that the agency expects use to resume with Thanksgiving in a few days.

The shuttle program is a short-term and partial solution to a deep and long-lasting problem: San Diego, the eighth largest city ​​in the United States, does not have a public transportation system that connects to its main airport.

In 2019, the airport served more than 25 million passengers. While travel fell during the COVID-19 pandemic, it has gradually rebounded and is expected to eventually return to pre-pandemic levels as business and international travel gradually resumes. In the meantime, the Airport Authority this month began construction on its expansion and $ 3 billion redesign of Terminal 1.

The California Coastal Commission approved the project in September after the Airport Authority promised to launch the free shuttle line.

In the long term, the Airport Authority, the Association of San Diego Governments and the San Diego Metropolitan Transit System are working on a high-speed transit connection to Terminals 1 and 2. The Coastal Commission requires the airport specifies where it will set up its site. transit station, which will generally be on the west side of the Terminal 1 parking structure. The airport authority obligated itself, reserving space for a station that could easily serve both terminals.

2021-11-22
Previous Post: Anger in Gaza rises at the cost of “humiliation” of travel to Egypt
Next Post: Will supply chain issues impact my Thanksgiving party?