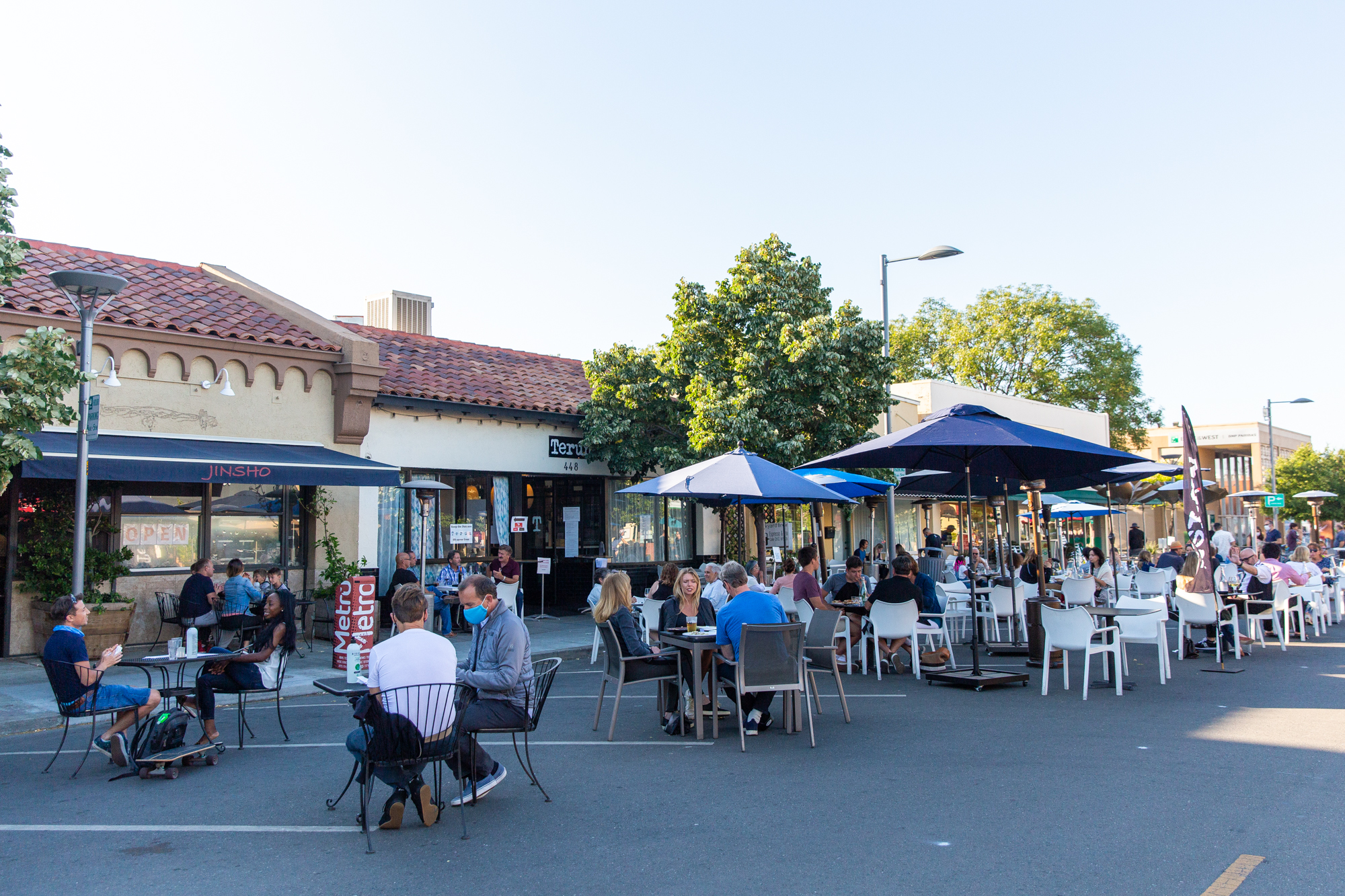 California Avenue has seen more than its share of changes in recent years, as Palo Alto leaders spearheaded a streetscape renovation, built a six-level garage, saw an exodus from longtime establishments like Antonio’s Nut House and The Counter and decided to close the street to cars.

One proposed change, however, proved a little too ambitious on Monday for area traders and the city council: the creation of a two-way cycle path down the middle of the centrally located promenade. The idea, which was proposed by city staff and championed by Mayor Pat Burt, was part of a larger plan to transform the random assemblage of tents and dining tables that today fill the street just east of El Camino Real into something more stable and permanent.

The planned bike lane was part of a larger proposal to create new design guidelines for California Avenue, which is expected to remain car-free for the foreseeable future. But after a long debate, the bike path failed by a 3-3 vote, with Burt and council members Greer Stone and Greg Tanaka backing it and vice-mayor Lydia Kou, council member Alison Cormack and council member counsel Tom DuBois objecting. Council Member Eric Filseth was absent.

The idea also proved a tough sell to area merchants and restaurants, even those who generally support keeping California Avenue car-free. Several said Monday they fear cyclists are undermining the pedestrian-friendly vibe of Palo Alto’s Second Downtown. Zareen Khan, owner of Zareen’s, a Pakistani-Indian restaurant on California Avenue, said she would like to see cars and cyclists excluded from commercial travel.

“Many locals, myself included, would love to have a promenade — free of speeding cars and bikes — to walk around and do some local shopping,” Khan said.

Lisa Robins, owner of Vin Vino Wine on California Avenue, also suggested the city’s latest plans to transform the street are overly ambitious and potentially damaging to the commercial district. She said she supported the city’s decision to close California Avenue to cars at the start of the pandemic, a step she said was key to supporting local restaurants. But with the city now embarking on a multi-year study to develop a permanent plan for California Avenue, establishing a new bike path would be premature, she argued.

“Now, just when it seems like we should be making a thoughtful transition to permanent parklets and a return to the relatively gentle traffic patterns and open access we used to have, you have decided to extend what was an emergency shutdown indefinitely, build a bike lane in the middle of Cal Avenue, and risk the continued decline of the entire district’s business environment,” Robins said.

But as council members split on the bike path, they reached consensus on other key issues regarding California Avenue. After a debate that lasted nearly four hours, council members reaffirmed their strong preference that California Avenue and part of Ramona Street be closed to traffic until at least December 2023. They also resolved to ban tents on California Avenue and asked staff to work with restaurants to transition to more permanent structures. And they agreed that dining rooms in both neighborhoods should have “edge treatments” such as window boxes or barriers that separate them from the street. All of these guidelines advanced by a 5 to 1 vote, with only Tanaka voting against the proposal.

The board also directed staff by a 4-2 vote, with Cormack and Tanaka dissenting, to develop a plan to support California Avenue retailers, potentially creating a marketing program for the area.

Council members, however, found themselves at an impasse over the bike path, which Burt said would benefit retailers and visitors. Creating a designated area for cyclists in the middle of the street would bring pedestrians closer to storefronts, he said.

“It’s becoming clear that the bikes are going down the center and the pedestrians are going to the sidewalk,” Burt said. “It helps retailers.”

In advocating for a dedicated bike lane, the city’s Bureau of Transportation staff pointed to California Avenue’s important role in the city’s bike network, with the tunnel at the east end of the commercial area serving as the one of Palo Alto’s few level crossings. for people on bikes or on foot.

“Because of the uneven distribution of bicycle and pedestrian crossings along the rail corridor, particularly to the south…and because California Ave crosses El Camino Real and reaches Hanover, a gateway to Stanford job sites Research Park, Delineating Bicycle Access Across California Closing avenues is important for local foot and bicycle traffic, regional employment, and access to public transit,” the report states. , the installation of a dedicated bike lane encourages continued cycling to closed streets and cycling to adjacent business districts and also connects our residential community via interconnecting bike lanes while ensuring the safety of cyclists and pedestrians .”

But Cormack wondered if implementing a two-way bike lane would compromise the city’s long-term ability to create a more pedestrian-friendly California avenue with green spaces and squares in the middle of the street. She suggested it would make more sense for cyclists to use Cambridge or Sherman Avenues.

DuBois agreed and suggested that approving a new bike lane, even on a temporary basis, would represent a significant departure from the council’s original vision for California Avenue as a dining hall.

“I think biking to Cal Ave is fine, but this shot is really a bike path through Cal Ave,” DuBois said. “When you reach a pedestrian destination, I think walking with your bike or parking is fine.”

While the bike lane idea flopped, council members showed no appetite for bringing cars back to California Avenue, as some merchants had demanded. Mike Stone, owner of Mollie Stone supermarket, said the business district was facing a “perfect storm” of challenges, including inflation, supply chain issues and rising petrol and fuel prices. interest rate. Besides restaurants, he argued, many businesses want to see California Avenue reopen to cars.

“You’re closing off the main artery,” Stone said. “Please for the life of the streets, open it up. It hurts more businesses than it helps.”

City polls, meanwhile, suggest the street closure remains broadly popular. In a recent survey of over 600 respondents, including business owners and visitors, 80% said they would like the city to continue allowing street food on a road blocked from vehicular traffic and 75% expressed support for dining in adjacent parklets. on a car-free road. However, only 43% prefer to eat in parklets next to a road open to car traffic.

Council member Greer Stone alluded to the numbers and said council’s next goal should be to give both California Avenue and Ramona Street some “coherence” after a period of rapid change and enhance the dining experience in both areas.