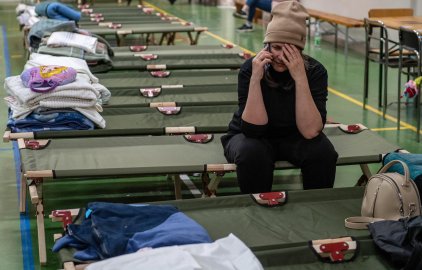 Ukrainian war: Many sick refugees at the Korczowa transit center

Sick Ukrainian refugees who fled the war cross the Polish border in precarious conditions. In at least one case, a migrant arrived with a needle still in his arm. A team of Italian doctors from Intersos are working to help them at the Korczowa shopping center, which has been transformed into a first temporary shelter.

The commercial center of Korczowa, on the border with Ukraine, has been transformed into a first temporary shelter for refugees leaving Ukraine. Many sick refugees are said to have arrived there fleeing the war, sometimes fleeing directly from hospitals, after crossing the Polish border in precarious conditions.

In at least one case, a migrant lost their glucometer, resulting in extremely high blood sugar levels. Yet another carried a loved one on his shoulders, dragging them straight out of the operating theater as the bombs fell. This patient arrived in Poland with a needle still stuck in his arm.

A corner of the mall has been set up with beds and partitions, where those living the hardships of war also face the pain of illness.

Already processed 600 in one week at Intersos ER

Italian organization Intersos has set up an emergency room with two doctors, support staff and a van that arrived from Italy last Sunday loaded with medicine.

“We provide initial treatment and emergency interventions by collaborating with paramedics from the municipality,” said health program director Francesco Sinchetto. “We stabilize the sick, who are then transferred to the hospital at the rate of around 100 a day,” Sinchetto said.

Doctors have already treated 600 patients in just one week, according to Intersos.

Around 6,000 refugees pass through it every day.

The field clinic is in a huge concrete structure similar to thousands of others across Europe, and before Putin invaded Ukraine it housed shops. Today, where there used to be shelves with clothes, mothers take shelter with their children, as well as the first migrants to arrive. For others, there are, at best, cots in the hallway.

There are 2,000 people staying there and around 6,000 who would pass through it daily. In addition to women and children, 20% are men, but only old and sick people.

As nobody uses a mask, there is a high risk that the center will turn into a Covid hotspot, especially given the low vaccination rate in Ukraine.

The volunteers said they have not yet seen any cases, but there is a concrete possibility that cases are developing.

The center provides refugees with clothing, hot meals and emergency medical care. Refugees are allowed to stay two nights before leaving, even if they don’t know where to go. However, people are coming from all over Europe to offer rides and free shelter in places like Paris, Berlin and Amsterdam.

Before coming to the Polish border, Italian doctor Alice Silvestro worked in Borgo Mezzanone, the Foggia migrant camp, a place even worse than the mall. “The hope is that it will remain a transit center; the one in Puglia is a permanent settlement,” Silvestro said. “That’s the big difference, but the desperation is the same.”

Fortunately, most of those who undergo medical examinations do not have very serious physical problems. Silvestro specifies that the main illnesses are linked to the cold, especially in children, or to muscle fatigue. “These are people who have spent days in cars or trains, or who have walked dozens of kilometers before reaching the border.”

The refugees also present serious psychological problems. A visit of 10 minutes is enough: as soon as they realize that they are finally safe, the refugees let themselves go. There are panic attacks and sobbing.

“It’s an inconsolable cry,” Silvestro said. “I don’t know what they could have seen to cry like that, but they don’t stop.”

There are also more serious medical cases, like that of Alina, who fled the hospital two days after giving birth by Caesarean section. Doctors diagnosed her with postpartum anemia, which required emergency hospitalization.

Another patient, Artur, fled the hospital and arrived in Poland with a needle still in his arm and a catheter still inserted. “He was in the operating theater in Kiev for back surgery when the shelling started,” the doctor said. “His brother loaded him on his shoulders and took him away. They spent five days in a bunker, then they managed to leave the city and arrive here.” Artur is now recovering in hospital.

Two children with cancer were also transferred to hospital. “Fortunately, the younger ones don’t understand what’s going on,” Silvestro said. “But these three-plus-year-olds are in shock. It’s hard to communicate with them, to get anything out of them.”

When volunteers take the electronic thermometer to measure the temperature, an object that has become so commonplace in two years of the pandemic, there is not one who does not jump back because it looks too much like a gun. “They are traumatized, their eyes are dull,” Silvestro said. The look is that of someone who has seen things no child should ever be able to imagine, according to Silvestro.